The 7 Habits of Highly Effective Communicators, Part 2: Get Their Attention And Loyalty

The 90-Day Microsoft Makeover Plan: Yes, It Starts With Steve 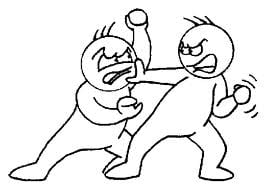 Two founders of a mid-sized technology company were at war. The CEO was aggressive, the CTO often sabotaged the CEO, and the company was divided into two camps. To make matters worse, recent tech breakthroughs were changing how their customers worked—and threatening to make their #1 product obsolete.

Productivity across the organization was plummeting, the executives didn’t trust one another and cooperation was at an all-time low. The CTO wanted to solely work on strategy, but he feared losing power by shifting to a role without direct reports. Since the culture was low on communication and high on fear, the COO had set up her own camp. The silos were spreading.

The CEO asked my team to parachute in and bring our neuroscience tools. Here’s what happened.

First we had to get everyone talking about what they wanted—without attacking one another. We put the leadership team in a room with food and libations.

Several were stuck in what we call the Tension Triangle (behaving as a victim, rescuer or persecutor) so we needed to quickly shift them into the positive counterpart (outcome, insight or action creator). We did a quick neuro-process called an Outcome Frame (below) to get them in their Smart State.

The cool part is that everyone was sick of the fighting and wanted to come together, they just didn’t know how. As each leader shared their outcome frame the light bulbs started going off (“Hey! We all want basically the same thing!”).

Next we got everyone aligned via a common purpose and code of conduct. This increased buy-in and reduced the potential of the below being perceived as a “Thou Shalt” list.

Here’s what they came up with:

Neuro Solution: Get Them Off the Ledge and Back in The Tribe

We needed a tool for when a leader slid back into their Critter State. We opted for good old SBM—safety, belonging, mattering.

If someone was exhibiting “fight, flight or freeze” behavior, if she was paralyzed on a project or spreading fear or starting wars she craved Safety. We could create safety by saying “I’ve got your back. Let’s tackle this together.”

If a team member was using “us vs. them” language or forming silos he craved Belonging, to be part of the tribe. We could loop him in by saying “I’m so glad you are on the team. Who else could we bring into our tribe/share this info with?”

If a leader was whining, complaining, stressing over not having enough power, she craved Mattering.  We could validate and appreciate her by saying “You are the best person to own this project, and I totally trust you.”

Approaching people in a Safety/Belonging/Mattering context changes everything. Find out what they crave and give it to them.

We coached the CTO to replace his sabotaging behavior toward the CEO with our favorite influencing skills. The CTO became chief systems architect, letting go of direct reports and reporting to the CEO. The CEO and new chief systems architect created a new vision that team members owned and were inspired by, using tools in our Leading From the Inside Out kit. This act alone recreated the motivational buzz they had in early years—and they created it together.

We coached the entire C-suite and leadership team on clarity of communication and got them using the tools for explicit communication we cover in SmartTribes. We guided them in creating new accountability structures using tools in our Increasing Accountability kit.

The company’s new strategic direction became profitable quickly, and they zoomed through the $250 million inflection point. They’ll reach the $500 million mark within 4 years or less.

How’s your culture? Is it fostering collaboration or killing it?