B’Bye Blame! How To Cure Your Culture NOW

Be Someone Warren Buffett Would Invest In 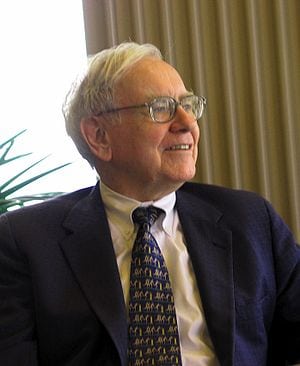 Warren Buffett doesn’t normally invest in technology stocks. So why did he recently buy over $10 billion of IBM?

Over the course of nine months Warren bought over 5% of the company. Then two weeks after IBM’s announcement of their next CEO he stopped investing. He openly regrets not investing when the current CEO first started.

Many of Warren’s top portfolio picks were bought a few years into a new CEO’s tenure after they’ve demonstrated successes.

Coca-Cola was one of Warren’s earliest investments and his largest holding. He bought in 1988 after the CEO successfully navigated a backlash from the company’s new formula by introducing Coke Classic, and by refocusing on the core business of soda. Eventually Warren purchased 7% of the entire company.

In the years following Warren’s investment in Coca-Cola the company grew through global expansion and the introduction of new soft drinks.

That was still their strategy a few years later.

And a few years after that.

More countries, more soft drinks. That’s it. It has worked for over a century.

Warren’s Leadership Lesson #1: Focus on a simple strategy and execute it. Rapidly course-correct if tactics fail. Influence over the industry and a strong market position will result.

The #2 spot in Warren’s portfolio is Wells Fargo, a financial services company that stayed on the straight and narrow while other banks gave out risky loans. They stayed accountable and stuck to the strategies that already worked despite tremendous industry pressure. They stayed accountable to their shareholders as well, bypassing the short term gains that appeal to some investors.

19.5% of Warren’s holdings are in Wells Fargo. For a reason.

Warren’s Leadership Lesson #2: Be Accountable to your strategy and stick to your standards, avoiding flashy and risky short term gains.

#3 is American Express. Warren bought it at a discount in 1964 when a fraud scandal brought the shares to an all-time low. Amex had made millions in loans based on the assessed, verified value of oil used in salad dressings . One tiny snag–the oil was actually huge tanks of water with oil on top, part of a sophisticated scam. Amex had a choice: pay out the loans they’d been scammed out of or punt and tank their reputation. American Express delivered on its promises by footing a bill for millions. A massive loss was the result, but the scandal demonstrated leadership through a crisis. The following year the shares doubled.

Warren’s Leadership Lesson #3: Be Direct. If a crisis occurs, handle it swiftly and completely.

How Do You Stack Up?

So what does Warren really want? The following leadership qualities plus one more that makes ALL the difference…

Be Focused. Be here now, not in the past or future. We chose what we want to focus on and what we want to ignore or defer. Being focused is about both being attentive and aware of issues, challenges and the real numbers and events that are taking place.

Be Accountable. Make and keep commitments to yourself and others. Developing leaders give their accountability away to either other people or circumstances. The quality and speed of results are directly proportional to how much accountability one takes on about having those results.

Be Direct. Be clear and explicit in your words, actions, visions, intentions and strategies. Otherwise misunderstandings, miscommunications and wasted resources will result. Clarity strengthens a team’s commitment and trust with one other and their projects.

Be Influential. How much influence do you have over outcomes and others? Developing leaders may think influence comes through domination. This is not sustainable, and results in a Crushed Culture. Influence occurs through our language, decision making, requests and promises, actions, intentions and ways of being. Influence is all about empowering others in tangible, measurable, specific ways.

How do you score on Leadership Lessons? Find out by taking our 5 minute assessment here (where you’ll find the fifth key leadership quality too!).

Christine Comaford is a five-time CEO with 700% ROI on her company exits. She has sat on over two dozen private and public company Boards. She coaches CEOs to achieve remarkable results in performance and operational efficiency by combining neuroscience and business strategy.