Hold Your Team Accountable: Here’s How

Double Your Sales And Trump Your Competitors In 3 Easy Steps

Why We Self-Sabotage–Are You Doing It Too? 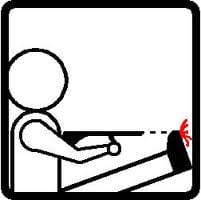 George wants to double his company’s revenue this year.

He’s been stating this goal for the past 3 years and still hasn’t achieved it. Why?

Because it’s not ecologically safe for him to have this outcome.

In my blog Why We Do What We Do I explained the subconscious tug o’war we all experience between our desires and our ecology. Our ecology formed our belief system, our frame of reference, our identity, our capabilities—and it also prevents us from getting what we want.

Until we know how to change it.

Let’s find out why George isn’t getting the doubled revenue he wants. Here’s what we learned when we worked through a basic Outcome Frame with him:

From this process George realized that his key issue was fear of letting go of control, yet he would have to do this (to a degree) in order to let his team help him double revenue. But knowing this intellectually isn’t enough—in the thick of battle George will still default to controlling behavior, because it is rooted in his subconscious mind. So we need to change this.

… Then Change the Past…

After we completed the Outcome Frame it was time to excavate. Where did George’s controlling behavior begin? Why was relying on others so threatening? We had to find out by asking:

Can you recall a time when you didn’t feel you had to control things?

Was there a major life trauma when your level of controlling increased?

Is there a trigger event you experience regularly when your controlling kicks into high gear?

The life trauma was the answer. When his parents divorced George was 7 years old. He then became the man of the house, and his father all but disappeared. Little George decided then that he would never be at the mercy of others, and such a life-altering experience, again. He’d shape his world and keep it in check.

Except that strategy no longer works for him.

So he asked me to help him change it. We did a process we call Movie Theatre, where we guided George through observing this childhood trauma from a distance and then de-fusing the beliefs he formed then. We helped him edit his identity and belief system, which is one of the deepest levels of change we mentioned in my blog How Change Fails: CEOs Focus on Symptoms Not the System. Next it was key to set structures in place to help him change his capabilities and behavior as a leader of his company.

We continued coaching George and began working with his executive team to shift too. The executive team had supported the command-and-control culture that George had created—they were now part of the System that everyone wanted to change.

… Which Changes The Future

Fast forward 9 months: George is nearing his fiscal year end. Revenue will double this year, wrapping up at a healthy $22mil. What’s next? Now we’re going to double the bottom line and increase the asset base in our continuing plan to strengthen George’s company for acquisition. I’d like to see him get $95mil+ for his company instead of his $70mil goal.

Isn’t it fascinating that our company and its performance is directly tied to who we are and what behaviors limit us? We self-sabotage and don’t even know it! The key is to root out the true reason we aren’t getting what we want and clear it. My preference is to use neuroscience techniques to do this.

What do you want that you aren’t getting? Let’s root out the reason together.