How to Budget in Uncertain Times

5 Steps To Get Your Priorities Back On Track Now

Why We Lie, And The Neuroscience Behind It

We lie to save face, to avoid hurting other people’s feelings, to impress others, to shirk responsibility, to hide misdeeds, as a social lubricant, to prevent conflict, to get out of work, and many more reasons.

Photo by meo from Pexels

And we lie a lot.

Deception costs businesses and government billions, ruins relationships, undermines what we care about and even takes lives. The more white matter (see my blog  The Truth About How Your Brain Gets Smarter)—or some might even say the more intelligent the neocortex—the greater potential a person has to lie.

Bella DePaulo, Ph.D., a psychologist at the University of Virginia, has confirmed that lying is simply a condition of life. In her research she found that both men and women lie in approximately a fifth of their social exchanges lasting 10 or more minutes. Wow. And over the course of a week we deceive about 30 percent of people we have 1:1 interactions with. Wow wow.

Women are more likely to tell altruistic lies to avoiding hurting other people’s feelings, and men are more likely to lie about themselves. De Paulo found that men lie more often to impress. A typical conversation between two guys contains about eight times as many self-oriented lies as it does lies about others.

Your Brain On Lies

Three key parts of our brain are stimulated when we lie. First, the frontal lobe (of the neocortex), which has the ability to suppress truth—yes, it’s capable of dishonesty due to its intellectual role. Second, the limbic system due to the anxiety (hi, amygdala!) that comes with deception—and yes, when we’re lied to our “Spiderman sense” here can perk up, just as we can feel guilty/stressed when we’re doing the lying. And third, the temporal lobe is involved because it’s responsible for retrieving memories and creating mental imagery. Just for fun, add the anterior cingulate cortex because it helps in monitoring errors, and the dorsal lateral prefrontal cortex because it is trying all the while to control our behavior. Our brain is busy, busy, busy when we lie.

And it’s far more peaceful when we tell the truth, because our limbic systems isn’t stressed about lying and our frontal lobe isn’t inhibiting the truth.

Where do we see a prevalence of lies? At work, or more specifically, to get out of work.

According to Zety’s recent 2020 research, of over 1,000 Americans, they found 96% confessed to lying to get out of work. Here’s the net-net:

More men than women were caught lying, and only 27% of respondents who lied to get out of work regretted it. For those caught, 70% regretted lying. But despite not feeling bad about themselves for lying, 59% of respondents said they wouldn’t do it again.

Here’s a silver lining: the older we get, the less compelled we are to lie to avoid work. Zety found: 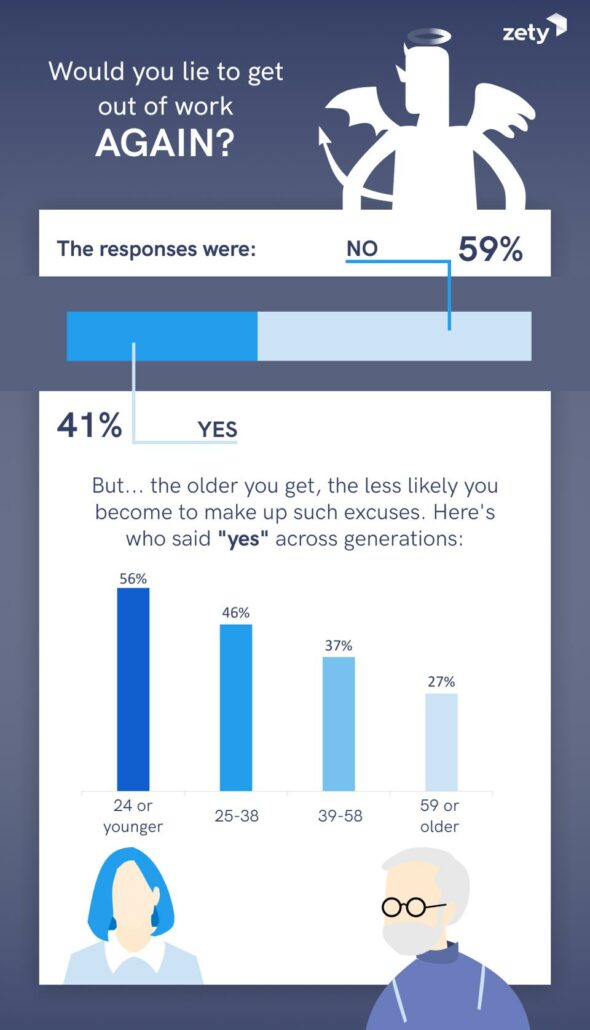 Are we all pathological liars? Or do we need to look at why we feel compelled to make up stories instead of just telling the truth? Is lying to avoid work a cultural problem, at least in part? And what about people that don’t experience regret when they lie? The stance of perpetual innocence, or extreme entitlement (and thus reality distortion) is a topic I addressed in my blogs on Borderline Personalities: How To Survive and How To Thrive.

To reduce the amount of lying in your workplace, you’ll want to first look at how safe people feel. Is it ok to tell the truth? Is it ok to fail? Is it ok to be human and not a super hero/work robot/cog in a wheel? Is it ok to have feelings and need a break now and then? Find out.

·     Do regular employee engagement surveys – see our fave one here.

So why do we lie? Because it works for us. Temporarily, at least. For fun, you might want to join me in telling the five types of truth; you’ll notice not only how good it feels, but how much simpler it makes your life.

How often do you lie? Why?