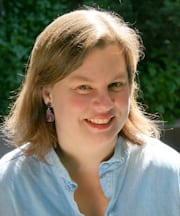 Janet Schieferdecker is an executive coach and leadership skills trainer. For over 14 years she has worked with managers on increasing their performance and consequent success. Janet brings not only international business experience at the managerial level, but also deep experience in neuroscience coaching and multiple personal growth modalities. She is known for her humor, insight, and skillful reframes.

Janet’s business career started as a Financial Analyst for Nippon Steel where her management of a debt portfolio was credited with saving the company over $250,000. As Asia Regional Marketing Manager, for Philips Medical Systems her responsibilities included conducting market research in China, the results of which impacted over $5 million in joint venture investment decisions. Still with Philips, she became the Product Manager for a newly bought OEM UltraSound product line, where she grew the annual revenue from 0 to 21 million NLG in less than two years.

As a manager responsible for bottom line results, Janet was known for her ability to quickly grasp high level strategic implications as she grew business units and systematized functions. Repeatedly drawn to chaotic situations which needed quick interventions and high levels of change, Janet was selected at the age of 29 to work with senior executives on mapping strategic and organizational change and then recruiting for it. As part of that catalyst team, Janet contributed to the division’s rise from the worst performing business unit to the best.

During her 20-plus-year obsession with personal and organizational behavior and development, motivation, and results, Janet has studied and worked with some of the best communications and leadership trainers, coaches, and personal growth practitioners in the world. She quickly learned that knowing what you wanted was important, but often not enough, and delved into the realm of neuroscience, learning how to effectively re-pattern the brain to implement desired changes particularly in beliefs about self, in acquiring peak performance behaviors, and in creating a growth mindset.

By merging her business understanding and her people perceptions and communication skills, Janet is able to provide her clients with a rich understanding of how change might work, and to accelerate them through perceived barriers.

Janet earned her BA in Economics and Art History (double major) in 1986 from Union College in upstate New York, and her MBA from London Business School in 1992. She spent the early part of her career living and working abroad in Japan, England, Holland, and Singapore, with a two-year stint in New York City. She became a certified NLP (Neuro-Linguistic Programming, the study and art of effective communication) Practitioner in 2000 and a certified NLP Trainer and Consultant in 2007, and is now in her 11th year of training others in using this wonderful mind science to improve their leadership skills.

In a short but valuable career detour, Janet earned a professional teaching credential and spent three years teaching emotionally disturbed and learning-disabled elementary school children.  Using her NLP background, Janet worked successfully with these children’s subconscious brain patterning to effect behavioral changes.  As a result, her classes were notable for the lack of disciplinary problems typical in these classrooms. Where 2-3 meltdowns per week was a common experience, Janet’s classroom had only two the entire school year.  This experience gave her immense insight into human nature and the learning process.

Today Janet helps executives manage transition. She is considered an expert on the psychology of success, is well known for her incisive questioning and ability to perceive and highlight the most important truths of organizational situations. By helping top executives understand what is really going on, now, she is able to help them dramatically expand their future.